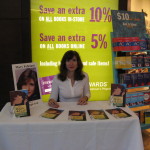 Canadian humanitarian Craig Kielburger, founder of the not-for-profit organization Free the Children, has been an inspiration to many, empowering youth to change the world.

The same can be said about Martin Luther King Jr., Mahatma Gandhi, the 14th Dalai Lama, Mother Teresa, Terry Fox and Mattie Stepanek, all of whom are featured in Mississauga author Mary Feliciani’s latest book, Humanitarians, Visionaries, Heroes, and You.

Feliciani, who recently published the 39-page book, says it’s a collection of seven mini-biographies of people who continue to inspire her. She also includes her own reflection on each of them.

“My intent is to motivate the reader towards … ethical responsibility and global citizenship,” said Feliciani, who teaches at a Catholic school in Toronto. “I use the voices of Mattie Stepanek, Martin Luther King Jr., Mahatma Gandhi, the 14th Dalai Lama, Mother Teresa, Terry Fox, Craig Kielburger and my own reflections to carry the message.”

Feliciani, who also authored The Magic Leaf, said Kielburger has an amazing ability to motivate youth to do their part.

“It is actually ‘cool’ to care about improving our world, which maybe wasn’t the case in other generations, or at the very least it wasn’t ‘cool’ to talk about,” she said.

Feliciani first thought about the idea for the book a number of years ago when she saw American poet Mattie Stepanek on Larry King Live. She said the interview brought her back to her own youth and got her thinking about the humanitarians who inspired her.

The book is intended for teenagers, but Feliciani says adults will enjoy it as well.

It costs $11.99 and can be purchased at Coles in Square One and Cloverdale Mall in Etobicoke.

In The Magic Leaf, a young boy named Carlo growing up in the small Italian town of Roseto in the early 19th century is responsible for bringing food and water to the townsfolk working on a nearby mountain. The physically demanding task begins to take its toll on Carlo, who starts to lose interest in his job.

However, a friend gives him a special present that promises to make his job much easier.

The book was self-published.